Help us to continue making a difference in our comunity. Please make a donation today. 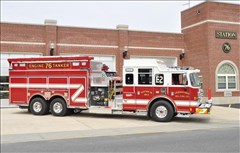 On Saturday April 19th, 2014 the members of the Frankford Volunteer Fire Company held an Open House in conjunction with the housing ceremony for its newest firefighting apparatus, a 2013 Pierce Arrow XT custom chassis Engine Tanker built by Atlantic Emergency Solutions. It's powered by a Detroit DD13 500HP engine and carries 3000 gallons of water. The new apparatus is classified as Engine Tanker 76-2 and it's outfitted with a 1500GPM pump, a light tower, a 10KW generator, and has a seven man cab. Engine Tanker 76-2 replaces a 1986 Pierce Engine Tanker that held open cab seating for a crew of four. 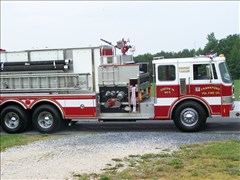 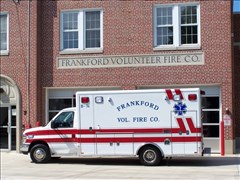 This unit is our newest piece of E.M.S. equipment. It has all required equipment to conform to the Delaware State Fire Prevention Commission's Specs. This unit also has a reflective safety chevron on the rear of the unit to increase it's visibility.

In December of 2008, we placed our second Command Unit in service. This unit, a 2008 Chevrolet Suburban, was the replacement unit for our 2005 Cheverolet Suburban Command Unit that was destroyed in a storm. The unit is designated as 76-8.

1997 Ford Econoline Van, 15 passengar. Used for the transport of members for various training duties, and any other necessary uses. 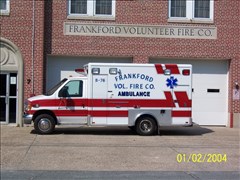 This apparatus it the older of the two E.M.S. units we have. It meets all state and federal standards. It has just been upgraded to include the use of Stryker brand stretchers to increase the capacity and manuverablity.

After careful planning, many grant writing sessions, and working through tight fiscal budgets, the Frankford Volunteer Fire Company placed Utility 76-12 out-of-service in the Fall of 2010 for an overhaul that was years in the making. Utility 76-12, a 2003 4WD Chevrolet Silverado 2500 HD affectionately known as "Mud Buggy", was retrofitted and returned to service on 11/1/2010 after being redesignated as Brush 76-0. Brush 76-0 was equipped with a 6" lift kit and off-road wheels and tires by Grays Service Center in Frankford, DE. Shore Emergency Equipment in Gumboro, DE outfitted the unit with a 20HP Honda Motor, HPX-200 Hale pump with a Hale Proportional Foam System, 200 gallon poly tank, 12 gallon Class A foam tank, stainless steel plumbing and control panel, Akron valves, 150 foot hose reel with Niedner fire hose, telescopic scene lights, and ground sweeps mounted in the front undercarriage. The unit has a complete compliment of wildland firefighting tools and chainsaws in bed and side mounted compartments and is capable of carrying five firefighters outfitted in full turnout gear. Future plans include the addition of a front brush bumper and winch assembly, rear step bumper, and an additional dry hose reel for forestry line. The fire company would like to thank everyone who has supported this multi-year project, specifically the Delaware State Forestry Service, Shore Emergency Equipment, Grays Service Center and Mountaire Farms. 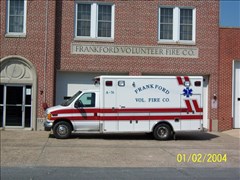 This unit has all required equipment to conform to the Delaware State Fire Prevention Commission's Specs. In addition it is upgraded to add privacy with fogged rear windows. It also utilizes new L.E.D. emergency warning lights on the box, as well as in the running boards. 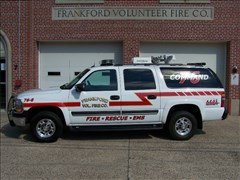 This unit is setup to be a "quick response" unit for both fire and EMS emergencies. It contains equipment for both basic life support and incident command operation. Most operators of this unit are trained to the minimum Delaware First Responder level. This provides for a quick on scene assessment of any emergency to determine the need of additional resources, and provide life saving basic life support care. This unit responds in conjunction with Fire, Rescue, and EMS. 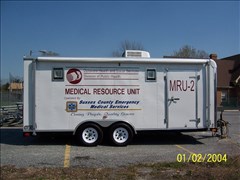 This unit is operated by the Sussex County E.M.S. We have been tasked with the transport, and initial setup in both emergency and non-emergency situations. It contains enough supplies to mitigate a "Level III" Mass Casualty Incident. Supplies include: soft supplies, backboards, food, water, etc. We are very pleased to be able to have a partnership that allows us to not only serve the frankford community, but wherever this unit is needed. 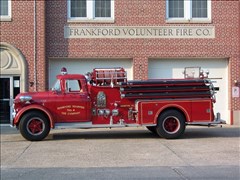 This engine is currently out of service. It is used only for parade purposes. It was one of the first few new engines that the Frankford Volunteer Fire Company owned. 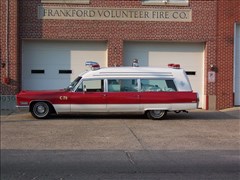 This unit was the oldest certified ambulance in the State of Delaware, until it was placed out of service by the department in 1999. Now this unit is used strictly for parade purposes. 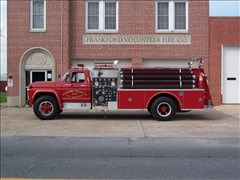 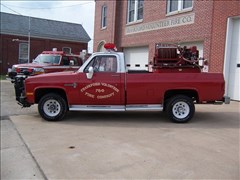 1985 Chevrolet Pickup with brush insert. 250 gal. of water, 90gpm briggs & stratton pump. One 250' booster reel. Compliment of rakes, shovels, and forestry line. After being retired as our brush truck this vehicle remains in the fleet as a utility vehicle re-designated 76-00 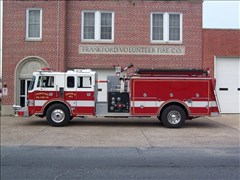 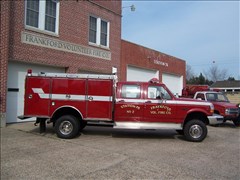 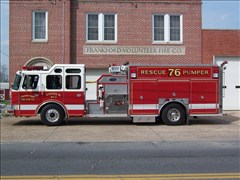